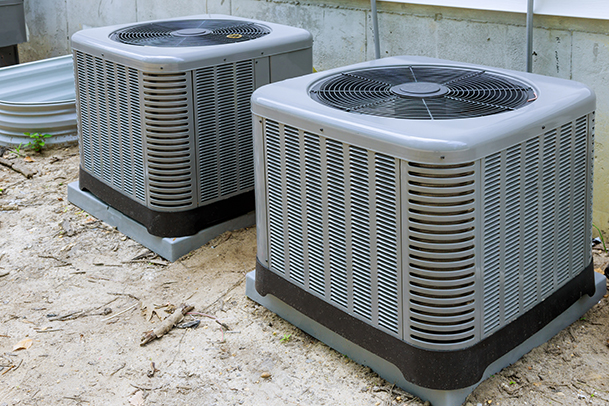 Cooling towers are best known for their use in manufacturing facilities and large-scale commercial HVAC systems. However, they have recently begun to have their place in residential HVAC as well. These structures help cooling systems function properly by exchanging heat in and out of the tower.

Before understanding the use of cooling towers in residential HVAC, it’s important to distinguish between two types of systems designed to cool homes. While both have the same general purpose, they achieve their intended result in two different ways.

Air conditioners are capable of converting warm air to cold air, or the reverse. When cooling, a condenser extracts warm air from the home’s interior and then transfers it to a refrigerant (i.e. cold water or a different fluid), thus dropping the temperature. These systems also help with humidity by removing liquid from the air while regulating temperature. Air conditioners are the most commonly used way of cooling residential homes.

Chillers that use a vapor compression system function a bit differently. The compressors squeeze a refrigerant, building up pressure. Then, it releases, allowing the refrigerant to expand and evaporate. During this evaporation process, heat leaves the system as well. The process repeats itself continuously. There are several types of compressors used in chillers, but all of them function with the same basic cycle.

While not unheard of in residential structures, chillers are most often used in commercial facilities, including factories, labs, and sports arenas.

Benefits of Water-Cooling in Residential HVAC

As chillers remove heat from the environment, that heat must have someplace to go. Rather than being released back into the air (thus defeating the purpose of the chiller), it is often passed through a cooling tower first. Cooling towers help to lower water temperatures, which then passes through the heat exchanger, cooling the hot elements so that they can continue to function efficiently.

This technology is widely used in commercial systems. However, the same type of concept has also recently gained momentum in residential structures. There are some clear benefits to consider. Chilled water piping can run efficiently for much longer lengths than the piping in a traditional home air conditioning system. Because of its efficiency, there may be cost benefits associated with it, not to mention the added benefit of not needing piping full of refrigerant run throughout the home.

Cooling Towers – How do they Work?

Understanding how a cooling tower functions can help clarify the benefits it serves to HVAC systems. There are essentially three main components:

Water Distribution:  The condenser pumps hot water collected in the chiller to the top of a cooling tower. In some cases, a basin feeds the spray nozzles and allows gravity to distribute the water to the fill. Other systems rely on pressurized piping to get the water to the “fill.”

Fill:  Also called the Heat Transfer Medium, the fill refers to the area in a cooling tower where hot water spreads out and some of it evaporates. That partial evaporation cools the remaining liquid.

Air Flow:  Without airflow, water that has reached the fill would simply remain there.  So, cooling towers generate large amounts of airflow to aid in evaporation through fans or blowers. The speed/power of these can be adjusted through the control system. The more precisely this is controlled, the more efficient the system can be at controlling the water temperature. Because of this, many systems come equipped with variable-speed drives (VSDs) which achieve this better than manual controls.

Just like with commercial installations, cooling towers used in residential HVAC systems require maintenance to function properly and safely. Drift eliminators are often used to limit the number of liquid water droplets that leave the cooling tower. While the goal is that water only leaves the system in the form of evaporation(pure water), this is never 100% achievable. Water leaving in droplet form can carry microorganisms and bacteria, so limiting this with drift eliminators is recommended. Also, regularly cleaning the nozzles to prevent clogs helps to keep the system from breaking down unexpectedly. Lastly, you must monitor the airflow as well, as it is critical for system functioning. Poor airflow from loose parts, debris in the chamber, or damage to the tower can easily result in the motor or fan failing. For non-HVAC experts, cooling tower maintenance can be near impossible. The best option is seeking out experts in the field to regularly visit and check for these and other common issues to keep your system running as it should.

No matter the size or type of cooling system a homeowner or business uses, efficiency is always the number one priority. At Cooling Tower Experts, we bring years of industry experience in both residential and commercial HVAC systems. We have done the research, worked in the field, and become industry experts so we can aid our customers in choosing, installing, and maintaining their HVAC systems so that they function efficiently for years. We are happy to provide our skills and knowledge and serve as a resource for all your cooling tower questions and concerns. If you have a project you would like to collaborate on, please reach out.

What is a Cooling Tower?